Regression: an exercise in sincerity without artifice 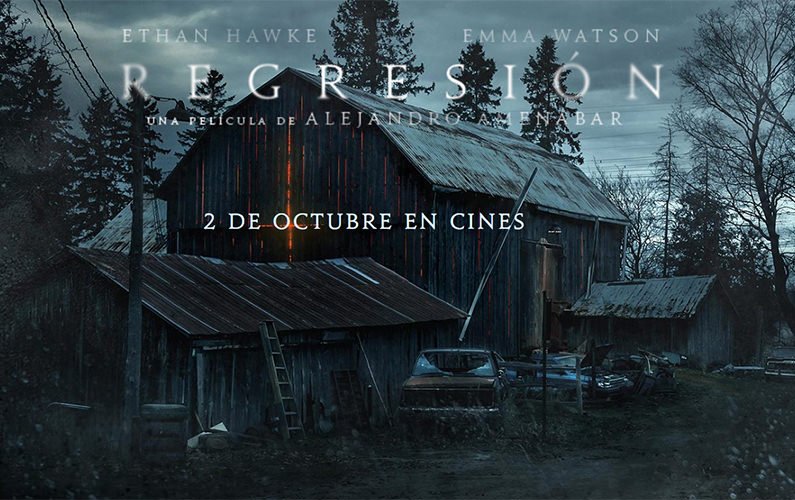 The film “Regression” by Amenábar tells how the so-called regressive therapies, past life therapies, regressions to childhood or to the maternal uterus, in addition to not having any scientific evidence, are discouraged due to the serious consequences that they can lead to, generating false memories of abuse sexual never suffered, satanic rituals that never occurred, alleged alien abductions or contacts with spirits that did not exist, having acquired psychological problems in hypothetical past lives, etc.

A separate note deserves those occasions in which, as indicated by the British Psychological Society, the term “age regression” is used when hypnosis is used to help the patient remember events in his life, in a health context and within a legitimate therapeutic approach and emphasizing that age regression does not literally transport the person to earlier stages of life.

The extensive empirical research that exists on the hypnotic suggestion of hypermnesia, that is, the increase in memory in terms of the amount of recall and / or precision, and the regression of age in hypnosis, indicates that hypnosis does not improve the amount and quality of the memory, being real or not what is remembered when one is in hypnotic age regression, being able to provoke false memories due to the activity of the hypnotist and the beliefs of the person who is being returned.

The myth that considers that under hypnosis you cannot lie and that the unconscious faithfully and accurately stores all personal experiences and that regressions can access supposed traumas from the past, has been exploited ad nauseam on the big screen. Fortunately, there are films like “Regression” directed by Alejandro Amenábar that, being faithful to scientific research, reflects the dire consequences of maintaining these false beliefs.

The psychologists Sarah Doménech Castellano and Pedro Velasco Alonso analyze this film from a cinematographic and scientific point of view.

Regression: an exercise in sincerity without artifice

Alejandro Amenábar, one of the most acclaimed directors in Spanish cinema, has returned to his fetish genre (the thriller) and his return, as expected, has not been without controversy.

“Regression” (USA, 2015), a Spanish-American production film starring the internationals Ethan Hawke and Emma Watson, takes up the already recurring dilemma dealt with by the Madrid director in works such as “Mists of Time” and, to a lesser extent, “The Sea Inside”, About the eternal struggle between faith and reason, religion and science, using this time as context and thread the wave of mass hysteria related to the supposed crimes and satanic rituals that occurred in rural America in the 90s.

On this occasion, the story revolves around the character of Bruce Kenner (Ethan Hawke), a conscientious and analytical detective in charge of investigating the alleged abuses perpetrated against young Angela (Emma Watson) by her father, Mr. Gray (David Dencik). ) with the variant that the latter, although willing to admit his guilt, does not remember anything about what happened. In order to help shed some light on the investigation, Dr. Raines (played by David Thewlis) is called upon to try, through hypnosis, to clarify Mr. Gray’s supposedly inhibited memories.

Sarah Doménech Castellano Psychologist. General Health Master's Degree. Official master's degree in advances in research and treatments in psychopathology and health.
Regression” is about the power of beliefs, their easy transmission and their uncontrollable consequences.

Thus, the entire film swims between the haze of doubt and irrational fear with light touches of clairvoyance to finally resolve the plot through logic, the unspoken truth that the viewer can intuit from the first scenes without get to fully assume.

And, as this successful script tells us, expectations can draw us realities that detract from the beauty of authenticity, of sincerity without artifice and this may have been the main reason for general disappointment about the film.

“Regression” is the sixth feature film by a director more than consolidated in the industry and whose career could be defined in terms of rigor and talent in equal measure. In this sense, his last film, although lacking the freshness of the unforgettable “Thesis” (Amenábar, 1996) follows the thematic and stylistic trail characteristic of the Amenábar brand. Thus, in thematic terms, the dilemma between intoxicating irrationality and not-so-attractive logic is again used to reinforce the latter above its antagonist. In addition, a new and robust argumentative feature is introduced: the genesis of fear. That is, where does fear come from? Is it an innate and unconscious emotion, adaptive and learned, or both simultaneously? In this sense, hypnosis is personalized as the ideal technique to unite the unknown and the visible, the imaginable and the verifiable as if it were a compass of knowledge.

On the other hand, on a technical level, it is worth highlighting the correction (not genius) of the entire film: script, editing, soundtrack, photography, costumes and acting. In reference to this last aspect, it should be pointed out that the excessive taciturnity of the character played by Hawke and the insufficient emotionality of his co-promoter Watson hinders the credibility and intensity of the script itself in some key scenes. In contrast, the interpretations of the secondary ones Doctor Raines (a therapist convinced of the almost limitless benefits of hypnosis) and Señor Gray (a suspicious father tormented by guilt) balance the balance, endowing the film with scenes worth remembering (such as that of rejection from the doctor to the possible inaccuracy of his treatment or that of the interrogation of Mr. Gray, dejected and convinced of his crimes beyond his own memory).

In any case, and focusing on purely scientific aspects, this film represents a true turning point in the portrayal of suggestive processes and hypnosis as a driver and, on occasions, a generator of them. To date, few productions have revealed the dangers of misuse of this treatment and its consequences. Without going any further, the latest feature films on this topic (see “Trance” (Boyle, 2013), “Now You See Me” (Leterrier, 2013) or “The hypnotist” (Hallström, 2012)) delve into the now hackneyed image of hypnosis as a truth-extracting technique, which nullifies the will of the subject subjected to its effects and which increases both the quality and the quantity of the memories evoked. In fact, if we delve a little more in this sense, we realize that the cinematographic tradition from the very moment of its birth to the present day has perpetrated a totally adulterated image of the set of clinical and experimental procedures that constitute hypnosis. From hypnotherapists turned into showmen with extraordinary powers, through hypnotized people, plunged into a deep trance, who exhibit the most unusual abilities or the portrait of treatment as a fast and effective technique capable of automatically healing all kinds of diseases or illnesses. of even releasing inhibited memories.

This last aspect deserves special mention for the important argumentative load it occupies in “Regression”. Thus, hypnosis is used as a necessary resource for the evocation of memories of Mr. Gray and his son, unable to reveal such contents naturally due to their terrible emotional implications. The role of Dr. Raines is, in this sense, absolutely fundamental because through questions, clearly tendentious and misleading, he guides the characters to the recognition of grotesque scenes or even to the assumption of savage facts and acts of which, in a first moment, they weren’t even aware. Along these lines we find paradigmatic scenes about manipulation through language such as the description made by the victim’s missing brother, Roy Gray, of the modus operandi of the satanic horde during his hypnotic session. Furthermore, we note in this same scene how many of the statements about the appearance of the members of this sect are preceded by statements from the therapist (highlights the fact that young Gray remembered them with hoods after the psychologist himself confessed, before the start of the session, “they were looking for someone with a hood”).

This point leads us to the formulation of a key question, both as viewers and as curious about the virtues of the treatment: can hypnosis increase the quality and quantity of memory? According to the latest research in this regard, and contrary to what is widely exploited cinematographically, this treatment does not increase memory. Even more, it increases the errors associated with it by favoring the hypnotized person’s confidence in their own memory, supported by the premise that “everything evoked under hypnosis is irrevocably true” (Capafons and Mazzoni, 2005). Furthermore, it is known that due to the very functioning of our mnestic functions, if there is the repression and subsequent release of an inhibited memory, it would not reveal itself in an unaltered way, since our memory has reconstructive or properly constructive processes that try to alleviate the deficiencies of the memory system. That is, it modifies or directly constructs content so that the memory set is solid and has internal cohesion. Again we find a cinematographic reproduction of this fact in the scene in which Detective Kenner shows the therapist a famous advertising poster whose protagonist he has internalized to become a key character in his satanic nightmares. This character is, therefore, illusory and created only at the request of the protagonist to increase the credibility of the alleged attack suffered in his house at the hands of the sect.

It is for this same reason that it is currently not advisable to use hypnosis in the forensic field since, as we have been able to verify, the testimonies extracted under hypnosis are influenced by both the prior beliefs of the person and the performance of the hypnotherapist (that is, , his speech, questions and previous premises).

Another aspect worth mentioning in relation to the successful illustration that this film makes on hypnosis is the dissemination of the real consequences that a perverse use of this technique can have for the patient. In this sense, the suffering of a father convinced of his guilt and of a young man tormented by the harassment suffered at the hands of a satanic group is portrayed. Facts whose falsehood is finally demonstrated but which does not exempt hypnotized subjects from the pain experienced by the assimilation of adulterated memories.

In short, “Regression” does not tell us another story, full of fables, clichés and cheap gimmicks. “Regression” tells us about the power of beliefs, their easy transmission and their uncontrollable consequences. On how sometimes what we deduce, intuit and conjecture in our memory is much more invalidating and devastating than what we can live in reality. “Regression” illustrates the immense power of previous expectations capable of crossing the merely theoretical barrier to achieve the status of unequivocal truth and alerts us to the dangers of collective fear, of its easy transmission and perpetuation through culture of which we all (regardless of our religious confessions and previous convictions) are part. But above all, “Regression” is the authentic and honest story of a director who, displaying a solid command of cinematographic resources, does not allow them to adulterate the truth implicit in his story. And it is that, although the very purpose of cinema is entertainment, its purpose must be able to go beyond that intention and manage to transmit emotion, conviction and truthfulness to the viewer. Undoubtedly, three fundamental pillars that this film has managed to defend and represent above all artifice.

No comments to show.